Setting the Bar in Criminal Defense For All in Broward County
Home
Articles
Automobile Checkpoints: Unconstitutional but Good for Writing Tickets 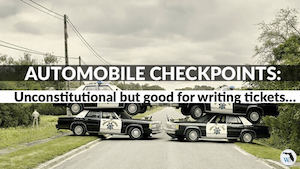 Our DUI Lawyers in Broward County have helped thousands.

The constitutionality of automobile checkpoints has been challenged consistently since their implementation, yet upheld by the United States Supreme Court which has set a “so-called” stringent set of guidelines before they are considered free from violating our constitutional rights. Once such guideline is an officer’s inability to stop vehicles of his choosing and that he or she must briefly examine a driver for signs of intoxication. Where such signs are evident, the driver would be redirected to an area of low traffic for further sobriety testing. The detention of law-abiding drivers is supposed to be kept to an absolute minimum, thus allowing travelers to move along quickly.

It’s no wonder that I am not surprised by yet another news article on the subject of DUI checkpoints. The Sun-Sentinel’s October 11, 2007 edition describes how drastically the State’s use of DUI roadblocks contradicts the Supreme Court’s strict guidelines for setting up checkpoints. In the article entitled, Officers Defend DUI Checkpoints, But Say Other Strategies Are Also Needed, the Broward Sheriff’s Office deputies’ quotes were demeaned regarding such checkpoints: there were statements to the effect that such checkpoints are justified in that “regular sobriety checkpoints. . .catch drivers wanted in other crimes [and they also generate hundreds of traffic citations for violations such as unsafe equipment and driving without a license or registration.]” The article quoted a statement that “very few DUI arrests were made as a result of the efforts of some 50 officers,” however, praises the issuing of some “118 traffic citations and the arrest of eight people (only four on DUI charges).” Clearly, the area of law enforcement under the guise of catching drunk drivers, serves an entirely different and admitted purpose.

How this jibes with the Supreme Court’s balancing of the State’s interest in preventing drunk driving, to the extent the system can reasonably be said to advance that interest and the degree of intrusion, remains as an apparent contradiction. Keeping in mind that the constitutionality of automobile checkpoints requires safety mechanisms to be in place such as written guidelines, notice to drivers, publication, proper lighting, proper police uniforms, and a methodical stopping system to avoid profiling, one can easily become offended, I should say, from an officer’s bragging to justify the ineffectiveness of such roadblocks other than the other amount of traffic citations written. Nowhere in the justification of automobile checkpoints on a constitutional level is it argued that the State has a vested interest in enforcing tail light violations.

News articles quoting the officers that conduct automobile checkpoints as stating that they are justified due to the high number of “tickets” that they yield, serves only to bring to light the criminal justice system’s talking out of both sides of its mouth. On the one side the State argues a strong vested interest in deterring drunk drivers through the use of sobriety checkpoints to the Supreme Court, on the other side, law enforcement officers admit that as a whole, they are entirely ineffective, but are otherwise great for generating revenue.

Understanding that the crime of DUI is a politically charged crime since the inception of Mother’s of Drunk Drivers and powerful lobbyist groups, we can comprehend that the prosecution all the way down to the “special conditions that are mandatory for each DUI conviction” are fueled entirely by money. As a result we see the continuous growth of the “DUI machine” which feeds off of itself and grows and increases with size and power by the passing of every new law that further impedes a citizen’s constitutional rights and lines the pocketbooks of both the State and privately owned rehabilitation centers, DUI schools, immobilization companies, Intoxilyzer manufacturers, ignition interlock providers and MADD scared straight programs.

In 2005, a news station in Sacramento CA., conducted an independent investigation in an effort to uncover what Broward County officers readily admit to the media today. Its undercover investigation determined that DUI grant money that was being used specifically to conduct sobriety checkpoints was motivated by the enforcement of other laws separate and apart from driving under the influence. KCRA investigators determined that said money was a “fraudulent use of resources.” According to State Senator Gilbert Cedillo, the news station also found that DUI checkpoints were becoming so large in scale that they involved dozens of officers cracking down on everything from felonies to driving without a license. Considering the steps taken to uncover things readily admitted in the latest article on the subject in Broward County, the trend toward accepting the erosion of our constitutional rights through the gateway crime, which is DUI, has only been exemplified.

Additionally, it is clear that the increasing number of required officers, i.e., 50 Broward County officers compared to a dozen or so Sacramento officers, is also readily accepted by the public in under two years.