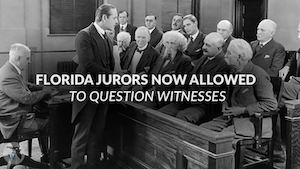 As of July 1, 2008, Florida jurors will be able to pose questions to witnesses during the trial. Until now, the questioning of witnesses in a criminal trial has been strictly limited to only the prosecution and the defense. Allowing the jury to submit questions is considered one of the most controversial reforms in our jury system allowed by the Florida Supreme Court.

The questions will be submitted in writing by the jurors and the court will decide if such a question is permissible under the Florida Rules of Evidence. Based on my experience, the vast majority of questions submitted will be impermissible, challenging the court to fashion an answer that will not confuse or prejudice either side. Lawyers spend much time in the pre-litigation stages either agreeing what evidence will come in at trial or having the judge decide in suppression hearings. The questioning of witnesses is a thought-out process prepared far in advance of the trial date. Areas in which the jury may wish to make inquiry have not been overlooked or neglected by the lawyers litigating the case. It is entirely unlikely that allowing jurists to question witnesses will do anything but to further confuse individuals charged with such a great responsibility.

Florida judges have been very vocal about their fear that allowing such questions will lead to a vast amount of appeals. There is also apprehension that the questioning may throw a wrench into the attorney’s strategies.

State attorney’s offices in Florida seem to favor the new law stating that they want the jurors to learn the truth in the trial. This logic is flawed when you consider that most questions may not be raised as a matter of law. The questioning of witnesses by jurors will also further delay an already laborious process. The issues may get confused and jurors may become prejudiced. Questions as to whether or not a defendant had been in jail or arrested prior may not be allowed under the evidence code. Fashioning a reason for not being able to answer such a question by the court is going to raise some significant arguments by the prosecution and the defense. It is likely that the jurors will inquire into areas such as hearsay, prior bad acts and irrelevant matters. The way that a court explains that these types of questions are inadmissible will certainly lead to speculation on a jurors part.