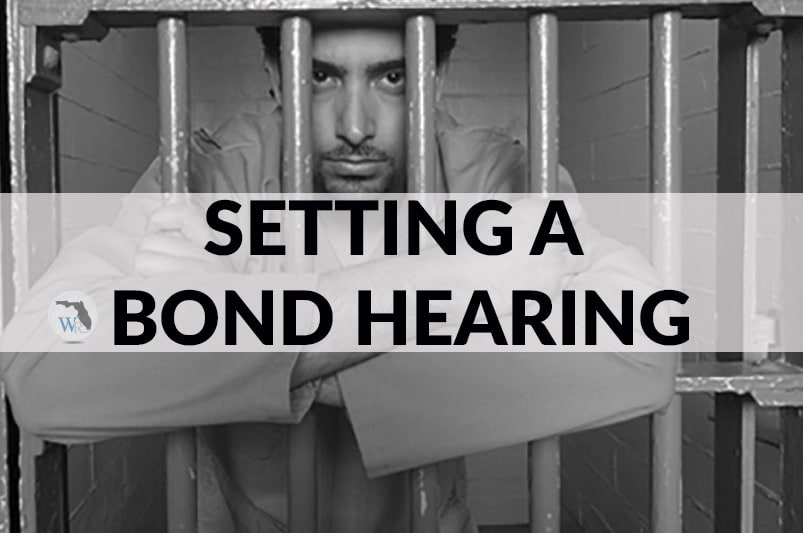 Setting a Bond Hearing is the typical procedure that enables a person get out of jail while the case is still ongoing. Bond hearings are filed through your hired criminal attorney. Bail involves committing a specific amount of money or valuable property that has a certain minimum cash value in the market to the court. In exchange for this bail amount, the court may release an accused from jail with the promise that the accused must show up before the court whenever asked to do so. The Broward Criminal Defense Lawyers of William Moore Criminal Defense have handled thousands of bond hearings in the last decade. There is not a criminal judge that we have not argued in front of.

In case the accused duly shows up before the court when asked during the bail period, the court may return the bail. However, if the accused fails to turn up despite court’s order, the bail amount will be retained by the court and the court may issue an arrest warrant against the accused. To seek bail, an accused may consult with a criminal defense attorney and arrange for this type of hearing to be set.

An accused may seek to know the bail amount at the earliest possible time. However, in some cases, the nature of the offense may require that Defendant to see a judge before the bail amount is decided. For less severe criminal offenses, a jurisdiction will typically have a standard chart that can be the basis to set a bail amount. In such cases, the accused can get out of jail simply by paying the standard bail amount.

The government may not use bail as a means to raise funds, or even as a tool to punish an accused person. The Eight Amendment ensures that the provision of bail is only used as a means to have a reasonable guarantee that an accused person returns to the court as per the orders of the court. In some cases, the arrested person’s financial position may not allow them to furnish the bail amount. In this situation the accused person can request the court during a special bail hearing or during a court appearance to reduce the bail amount to make it more affordable. Our Broward criminal defense attorney’s offer legal services to those seeking to obtain a bond and be released from jail.

How Do I Get a Bond Hearing in Broward County?

The procedure of bail hearing in a criminal court involves a close examination by the judge regarding the facts and circumstances of the case after being presented by your Criminal Attorney. Before releasing an individual on bail, the judge or magistrate determines everything that may be required to ensure the appearance of the defendant at trial. The court will pay particular attention to the nature of the offense and see whether it involves narcotics or violence.

If you are in need of representation, schedule a complimentary consultation with our Criminal Lawyers in Broward County. William Moore Criminal Defense also maintains offices on Broward County.

The court may also examine the type and value of an asset or property that the defendant may offer as collateral. The extent of available evidence against the defendant also becomes a key factor in deciding bail. The court will review whether the individual was on probation or parole at the time of the current arrest, and if he or she poses any risk to others in the community.

During a bond hearing, the judge will examine the evidence pertaining to the character and history of the defendant. The judge will consider the following issues:

If the court finds that the defendant poses a credible threat to the security of the community, it may hold him or her without bail. If not, the federal law requires in most cases that a criminal defendant be released upon execution of an unsecured bond or on personal recognizance.

While out on bond, the defendant must not commit a crime. If the court is not satisfied about the defendant’s appearance for trial, it may release the defendant with conditions. A number of conditions may be imposed under the federal law.

Some of the common conditions in such cases include:

In some cases, the defendant may lack the finances to post his or her own bail. In such a situation, the defendant may enter into a contract with a bail bond agent to act as a surety, and thereby secure bail. The agent will post bail for a fee that may typically range between 10 and 20 percent.