Police Officers and Their Families Exempt From DUIs in Florida 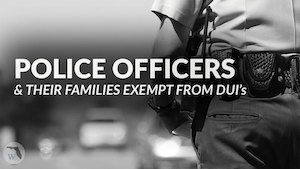 Having been a former prosecutor I know the “brotherhood” of law enforcement all to well. It’s been over a decade now that a former colleague of mine was arrested for DUI despite his being an active prosecutor in South Florida at the time. The buzz in the legal community was disbelief than an officer had arrested one of their own prosecutors and it was expected that the wrath from such behavior would eventually come back to haunt her. Sure enough, the officer making the arrest was shunned to the point of having to relocate to a department in North Florida. Such practices of law enforcement just don’t sit well with the general public, especially when so many good people have been arrested and charged with DUI. While zero tolerance is a term of art specific to making an arrest of every minor suspected of DUI, it can be that a “zero tolerance” law is in effect in the literal sense in Florida, calling for an arrest of every actual suspect in that the offense of DUI is absolutely a politically charged crime allowing no discretion to cut someone a break, unless of course, if you are a police officer or a family member of one.

Take for instance the wife of a Manatee County police officer who was driven home after being detained at a DUI checkpoint rather than arrested. Despite her reeking of alcohol at the scene, the police officer stated that Wendy Getman did not appear to be intoxicated. Why then was she not required to perform field sobriety exercises. As with most checkpoints this day, the magic number for arrests were made in addition to over a hundred traffic citations being written, which are of course, very lucrative to the County.

As for Wendy Getman, the wife of Deputy Brett Getman, well she was given a break just this time. But if I had to put my money on it, Mrs. Getman has a license to drive impaired and I would bet the farm that this isn’t the first time she’s been cut a break with respect to driving offenses. Just check the statistics. Police officers and their families are rarely, if ever cited, and doesn’t that just burn?