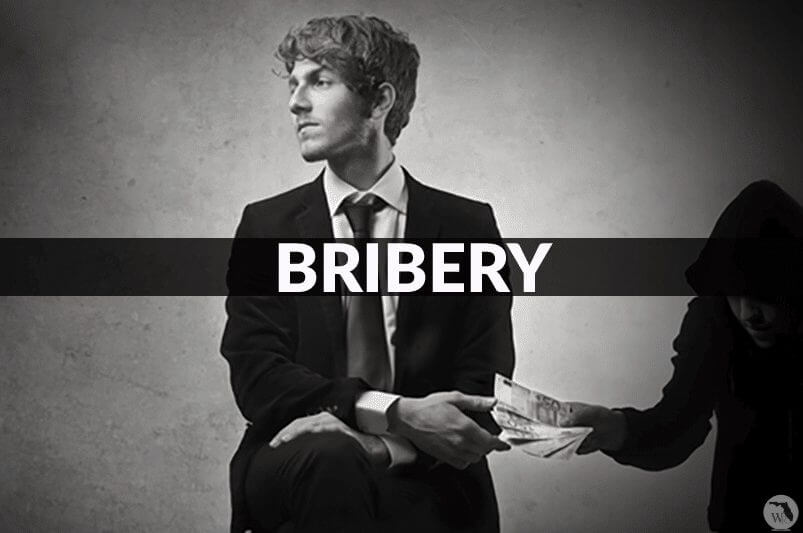 – If a person is trying to bribe a public servant or a police officer, the second-degree felony offense holds a harsher penalty than the crime itself.

– Under the same statue, public officials too can be found guilty of accepting bribes.

This kind of bribery refers to giving, promising, offering, or conspiring to give a bribe to anyone who expects to participate or participates in an amateur or professional match, game, contest, sport or race; or to any judge, referee, umpire or official of such a game, with the intention of influencing a predefined decision. This is a third degree felony that is punishable by up to 5 years in prison.

Bid tampering refers to the unlawful act of a corrupt public servant to influence or try to influence the outcome of a competitive bidding process that has been undertaken by any state, county, municipal, or special district agency, or any other public entity, with the intention of procuring commodities or services.

Commercial bribery refers to an incentive or benefit, either monetary or otherwise, given to another person with the intent to influence that other person to violate certain duties that they may be responsible for. This is a third degree felony that is punishable by up to 5 years in prison.

If a person solicits, agrees to accept or accepts a benefit or an incentive with the intent to violate common-law or statutory duty to which that person is subject to, it is termed as commercial bribe receiving, is a third degree felony and is punishable by up to 5 years in prison. Any person can be convicted of commercial bribery receiving such as a guardian, trustee or fiduciary, an employee or agent, a physician, lawyer, appraiser, accountant or professional adviser, a partner, officer, manager, director or a participant in the direction of the affairs of an organization.

Official misconduct refers to the unlawful activity of a corrupt public servant to either cause harm to a person or to obtain an incentive or a benefit from them. This could be done with the intention of falsifying an official document or record, or the concealing, destroying, or covering up an official record. Broward County White Collar Crimes Attorney William Moore will be making available 2 hours of criminal defense lecture materials outlining the most notable Florida Official Misconduct cases of the last 5 years in addition to providing in depth criminal defense evaluation and analogy. Said Criminal Defense Videos will be available for download in mid June.

According to the law, bribing someone to violate a common law duty in a commercial setting or bribing an athletic contest official is a second degree felony. This includes employees, agents, trustees, fiduciaries, guardians, lawyers, other professional advisors, accountants, corporate officers, members of boards of directors, and arbitrators. If any of these people solicit or accept a bribe, it is a third degree felony. Most of these offenses are punishable by up to 5 years in prison.

For more information, contact the White Collar Crimes Attorneys of WilliamMPA and obtain materials that accompany the defense articles in this section.

838.021 Corruption by threat against public servant.

838.21 Disclosure or use of confidential criminal justice information.

838.22 Bid tampering.
Contact Us
Practice Areas
Client Reviews
★★★★★
William Moore saves the day once again... I can’t thank him enough for helping me get my life back on track...You’ll be glad he’s on your defense team, I guarantee it. Eric Bailey
★★★★★
William is an amazing lawyer on the first day he took my case from a felony to a misdemeanor. He always answered my calls and text messages, never a problem. He was always the one in court not sending someone else, unlike my last lawyer. 10/10 would recommend. If I ever have any other problems, he will be the first person I call. Shane B.
VIEW MORE
Submit a Law Firm Client Review