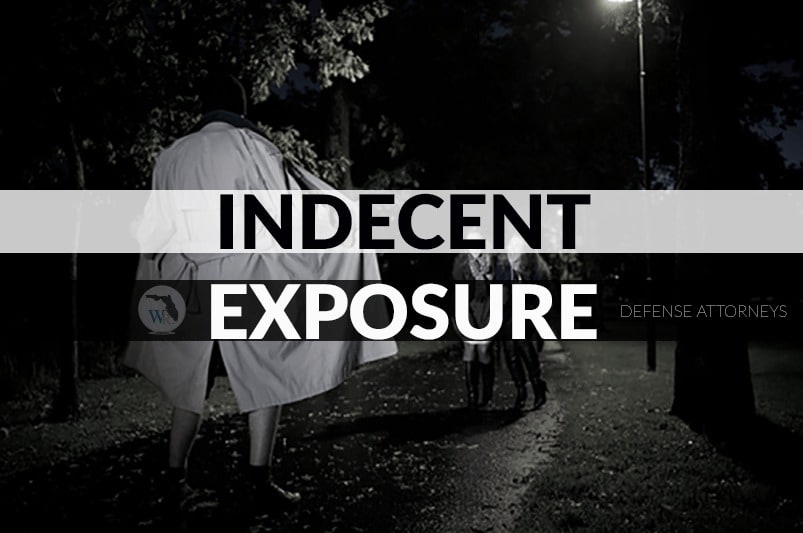 Indecent exposure or an intentional exposure of sexual organs under Florida law is treated as a serious criminal offense. It can invite a significant punishment for a person convicted of this crime.

Potential penalties are involved as a part of the punishment, and the convicted person can face challenges with regard to college admissions, employment prospects, attaining a professional license, and similar other aspects of everyday life. Experienced Florida criminal defense attorneys may be contacted to explore legal options in case an individual is charged with indecent exposure.

Under Florida law, it is a crime to exhibit or expose one’s sexual organs in an indecent or vulgar manner, in public places or the private premises of someone, or so close thereto so that it can be viewed from such private premises, or to be unclothed in public with the exception of any place designated for that purpose.

Fla. Stat. 800.03 Exposure of sexual organs.—It is unlawful to expose or exhibit one’s sexual organs in public or on the private premises of another, or so near thereto as to be seen from such private premises, in a vulgar or indecent manner, or to be naked in public except in any place provided or set apart for that purpose. Violation of this section is a misdemeanor of the first degree, punishable as provided in s. 775.082 or s. 775.083. A mother’s breastfeeding of her baby does not under any circumstance violate this section.

The crime of indecent exposure can be proved in a court of law if the prosecution manages to establish these four elements of the act beyond a reasonable doubt:

The Florida statute makes use of terms ‘indecent’, ‘vulgar’, ‘lewd’, and ‘lascivious’. These terms under the law refer to an act of unlawful indulgence in sexual lust or a lustful, wicket, licentious, unchaste, or sensual intent on part of the individual performing the act.

An act of exposure or exhibition will not be considered indecent, vulgar, lewd, or lascivious unless it offends at least one or more individuals viewing such act, or unless the act intrudes upon others’ rights in a substantive way.

The law further defines a ‘public place’ as any place that is designed or intended to be frequently visited by the general public. If the case of indecent exposure involves an act committed in a public place, the requirement of at least one person being offended by such an act is removed.

“If the act was committed on or close to the private premises of another person, away from the view of general public, it is necessary to prove that someone was offended by the act.”