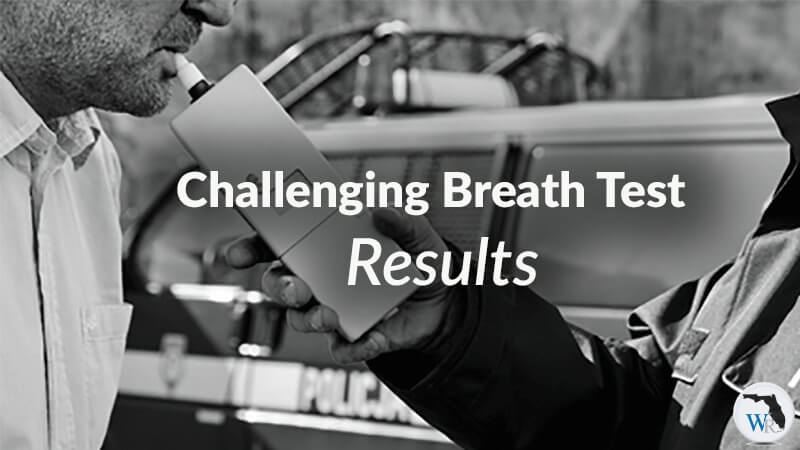 A breathalyzer test result can be used by the State as evidence to prove that an individual’s Blood Alcohol Concentration (BAC) was .08% or higher. However, in many instances, the BAC readings may not be accurate due to various reasons. Florida law require the State to prove the accuracy of the tests on several counts before the court may rely on such test results.

Specifically, the State must prove the following:

Since a person’s blood-alcohol level rises over time as alcohol is gradually absorbed into the system, it is possible that the blood-alcohol level was within legal limits at the time a (DUI) defendant actually operated the vehicle and did not exceed such limits until the administration of a breath or blood test, particularly where alcohol was consumed shortly before or while driving.

Nevertheless, if the test is conducted within a reasonable time after the defendant is stopped, its results are admissible in evidence without “retrograde extrapolation,” that is, the presentation of supplementary proof relating the test result back to the time the defendant was operating the vehicle.

An example of this would be a blood-alcohol test conducted in a “reasonable manner,” approximately four hours after the defendant’s driving which showed a result of 0.08 percent, since the driver’s blood-alcohol level should already have peaked and been no higher than it was at the time of driving. Matters of delay between driving and testing, as well as the State’s failure to relate the test results back to the time of the offense, go to the credibility and weight of the results, rather than to their admissibility.

For the purpose of determining the admissibility of blood-alcohol evidence, a test is conducted at an unreasonable time if the test results do not tend to prove or disprove a material fact, or if the probative value of the evidence is outweighed by its potential to cause prejudice or confusion.

The William Moore Law Firm is a Fort Lauderdale criminal defense law firm offering decades of experienced legal representation and knowledge that is aggressive and skilled in the art of criminal defense.