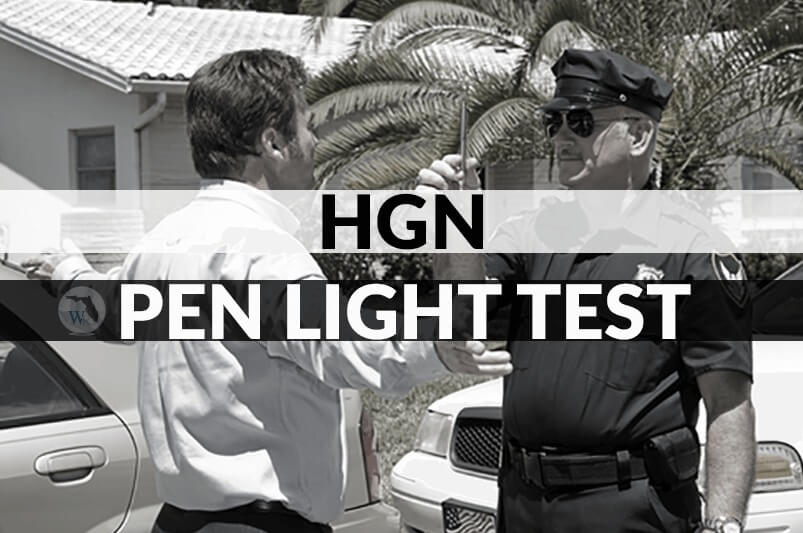 DUI defense attorneys are expected to have a strong understanding of how field sobriety exercises are conducted and attacked in Florida DUI investigations. The manner in which investigative process was conducted in any Florida DUI case may provide for significant defenses to the DUI client.

Florida Rulings on the Admissibility of HGN Tests

State v. Meador and Williams v. State, the courts laid down the rules for the use of field sobriety test results, including HGN. Unfortunately, these courts had no reason to address whether HGN test results could be considered, absent the proper foundation, in determining whether the officer had probable cause. Consequently, DUI lawyers in Fort Lauderdale appear to be without legal precedent on this specific issue. Fortunately, in Meador the court did not allow lay testimony on HGN results, and required proof of the traditional scientific predicate in a trial because such evidence would otherwise be unfairly prejudicial. It remains to be seen whether those same considerations would apply in a hearing on a motion to suppress. On the other hand, under Williams, a properly qualified DRE can give the necessary testimony to permit HGN test results to be considered in determining probable cause. That was modified in Bowen v. State to permit any qualified and trained Broward police officer to give such testimony.

HGN Limitations Are Administered by Officers Who Are Not Properly Trained

Another Florida DUI trial court permitted HGN evidence despite noncompliance with some of the protocols set forth in the training manual. The court took this position because HGN “was used as an investigative tool, among the totality of circumstances, by the officer in determining probable cause for the arrest.” The officer started with the right eye rather than the left, did not check for “‘equal tracking,’” and deviated from the exact time recommended for each “‘pass.’” Although the manual indicated that such changes affected the validity of the test, the court still allowed the evidence because there was no evidence that these specific departures had any impact and it was a matter for the fact finder.

There is ambiguity in Florida as to whether an expert witness can utilize HGN test results to arrive at an actual blood alcohol level based on the traditional scientific predicate. One Florida DUI court ruled that a Broward police officer cannot do that because the statute requires the Department of Law Enforcement (formerly H.R.S.) to approve the methods for determining blood alcohol levels (BAL), and the HGN method has not been approved. Foreign DUI courts have taken a similar position.

In Williams, it was argued that the court focused specifically on this issue. The court said that HGN test results cannot trigger the statutory presumptions without the results of a statutorily authorized chemical test also being in evidence. Further, the results cannot be used to establish guilt based on a BAL above the legal limit. “However, HGN test results are admissible independently of other evidence as proof that a defendant was impaired under Florida criminal law” This ruling was based on the fact that, with regard to Florida DUI prosecution, the legislature has not approved HGN as a method for establishing blood alcohol level.

Bowen v. State, has cast doubt on the admissibility of HGN tests results in the absence of a confirmatory blood, breath, or urine test. In grappling with this issue, these things should be noted: (1) Bowen relies specifically on Faires and Williams; (2) the opinion doesn’t state whether such confirmatory evidence is required only when HGN tests results are used to introduce a specific BAL based on the traditional scientific predicate, or in all cases where there is any testimony about HGN tests results; (3) it is unclear whether the Florida court’s statement was dictum. As previously noted, several Florida DUI courts have ruled that this language in Bowen is dictum, and the ruling in Williams permits the introduction of HGN tests results without a confirmatory test.

A three judge circuit court appellate panel agreed with those DUI trial judges and concluded that this language from Bowen is dictum for three reasons. First, Williams, which is the foundation for Bowen does not require a confirmatory test in Florida DUI cases. Second, Bowen draws no distinction between use of HGN to prove a specific alcohol level and HGN as part of the total evidence to prove impairment in a Florida DUI trial. Third, the sole issue in Bowen was whether HGN test results were admissible through a trained and qualified officer who was not certified as a drug recognition expert, and the reference to the confirmatory test had nothing to do with that issue.

In Robinson v. State, the court said: “We have not, however, adopted the rule that obtains in the Third District, which requires ‘a confirmatory blood, breath, or urine test before HGN evidence is admissible.’” This comment may also be dictum because the issue in Robinson was whether lay opinion about the significance of HGN test results was harmless error. In any event, DUI lawyers in Fort Lauderdale have repeatedly stated that further clarification in this issue is needed.